After several absent years from the keyboard scene and the resounding failure of the 2011’s Cadenza product, Alesis tries again to enter into the affordable segment of digital pianos market with its Coda series, which replaces the former with two brand new products.

Officially introduced at NAMM 2015, the Alesis Coda and Coda Pro digital pianos are the new solutions for beginners to intermediate from the house founded by Keith Barr. Designed with portability and affordability in mind, these two products are also strongly focused on sound and overall quality.

The Cumberland-based company learned from the mistakes made with the Cadenza and delivered a much more attractive and modern product improved in all its main features, offering two different keyboard types and a new built-in sound engine, made in collaboration with AiR Music Technology and SONiVOX, two of the world’s most renowned music software companies.

Before we move on, please use the table below to compare the Alesis Coda to other quality, affordable digital pianos:

Now, let’s focus on the main features of both digital pianos.

The new Alesis entry-level product comes in two different models: the standard $399.99 Coda and the $499.99 Coda Pro. Both share the same design and main features, but while the first is an 88-key semi-weighted digital piano, the Pro model offers instead a 88-key weighted action keyboard, which is of course a better choice for piano students, teachers and live musicians.

For an additional $149.99, you can transform both Coda and Coda Pro in a upright digital piano thanks to the optional Coda Piano Stand, an elegant piece of wooden furniture which includes the three pedals-Soft, Sostenuto, Sustain and the half-pedal functionality, and can be connected to the keyboard via a single cable.

Below, please take a look at some of the best selling digital pianos available online, and see how their features compare to those offered in the Coda and Coda PRO:

The first noticeable change between the old Cadenza and the new model is of course in the aesthetics: Alesis chose to abandon the old-fashioned design of the previous piano and embrace a better-looking modern design, by putting two big speakers in the top of the flat chassis and making a huge facelift to the layout and the main controls interface.

The chassis itself now features a more convincing mix of materials in both lucid and matte finishes, which helps the Coda and Coda Pro be far more attractive than its predecessor. Despite the 88-key extension and the piano dimensions, both models are very lightweight (only 23.6 pounds for the Coda, about 27.6 pounds for the Coda Pro, half than the weight of the previous model) and offer an easy setup and portability for any situation.

The main interface includes a power switch, a volume knob, a LED display, 16 buttons to control MIDI, Metronome, Patterns, Split/Layer, Transpose, Duet mode, with another 10 buttons used to control the 20 built-in voices. Other options can be managed using the SHIFT button, plus the related note on the keyboard.

On the left, a pitch bend wheel allows to raise and lower the notes currently being played. On the rear side, we find a USB port, a MIDI out, the Sustain jack, an AUX I/O and the power jack, while in the front side we find two headphones output.

While the Cadenza grand piano patch sounded awful, the new piano sample from SONiVOX and AiR really makes the difference between the two Alesis models.

Coda and Coda Pro are now aligned with the best products in the entry-level market (like the new Yamaha P-45) and feature a great piano sample, which sounds as good in the middle section as in the lower part. The grand piano tone allows for a very natural playing sound, thanks to the 64-note polyphony, which allows you to keep/sustain more notes while pressing the sustain pedal or using the Split/Layer mode.

The ability to split or layer two different tones (or do both, being careful of the total available polyphony) allows Coda and Coda Pro to achieve a very rich and versatile range of voices, much wider than competitors such as Yamaha. Of course, we are talking about basic sounds and not professional ones, but it’s worth mentioning that some presets sounds particularly good, also thanks to the integrated DSP, which adds some great effects to the mix.

Another big improvement from the previous model is the new 88-key hammer action weighted keyboard chosen by Alesis, which replaces the horrible Cadenza’s keybed and offers much realistic feelings while playing. Of course, clicking noises are still there, but at least the overall quality of the new keyboard meets the standards of competitors’ products.

Having two separate products differing only in the weighted keybed (semi-weighted vs hammer-action weighted keyboard), you might be asking yourself the following question: how do I pick between Coda and Coda Pro?

Well, the obvious choice is in favor of Coda Pro, which offers a more versatile choice useful for almost any situation, from studying to gigs, from rehearsals to being used as a USB controller to manage your VSTs. Keep in mind that, aside from the different keyboard types and weight, the two models’ features are basically the same. So, ultimately, your choice comes down to how the piano keys feel under your fingers, how heavy it will be to move from location to location, and how much more money you’re willing to spend.

With that in mind, if you are a teacher, it’s easy to suggest the Coda Pro for its hammer action keybed. Thanks to the Duet mode, you can split the keyboard in two parts for playing along with your students. You can even count utilize the two headphones outputs so that you can rest assured you’re not disturbing anyone else in the piano studio or house. You can also use the built-in metronome or record directly on your keyboard using the integrated 2-track recorder, which allows for up to five songs to be recorded.

If you are a solo-musician, the Styles and Songs sections allow you to play along a wide variety of musical genres (from rock to blues, from pop to jazz, etc.) and even mute a specific part of a play-along song to perform your solo. In this case, choosing between Coda and Coda Pro would only depend on your interest of having (or not having) a fully-weighted keyboard under your fingers.

If you are a live or studio musician, by choosing the Alesis Coda Pro, you can acquire a great digital piano suitable that has several great features and overall purposes. With the USB port, you can transform the Coda Pro into a controller for using your favorite VSTs (which can be controlled with the Pitch Bend, absent in most of competitor’s models), while the MIDI output can be used with external expanders and sound modules to create very complex setups.

But if your goal is to play for fun and have a great, extremely-lightweight digital piano, then you may consider saving $100 and buying the standard Coda. Of course, while the Coda is really great for playing the organ and Rhodes voices, it does not offer the same feeling and responsiveness of the Coda Pro’s hammer-action keybed, but it’s still a good compromise considering its final retail price.

After the Cadenza’s misfire, Alesis has finally redeemed its name by creating a new series of digital pianos, the Coda’s, which offer two different products designed for students, teachers, live musicians and more. Both Coda and Coda Pro offer a wide array of options that are particularly great for a $399-to-$499 digital piano. Alesis can now feel comfortable facing its competitors, as they’ve created a worthy and convenient product, and arguably one of the best budget digital pianos on the market. 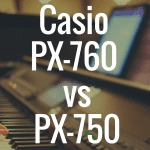 Recently, Casio has updated one of its best-selling home digital pianos under the $1000 price range … END_OF_DOCUMENT_TOKEN_TO_BE_REPLACED 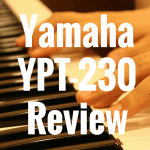 Yamaha pianos have always been known to have a wide range of variety, class, and professionalism to … END_OF_DOCUMENT_TOKEN_TO_BE_REPLACED 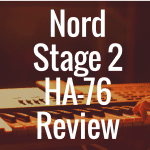 Let’s get one thing out of the way: the Nord Stage 2 HA76 is an awe-inspiring piano.  But … END_OF_DOCUMENT_TOKEN_TO_BE_REPLACED