You bought a new keyboard or piano, and now you want to know how to learn to play piano. Lessons are expensive, and learning on your own is complicated. Somehow, you managed to figure out how to pick out the note names by watching Youtube videos or by looking at a good starting article.

Now you have mastered “Hot Cross Buns” and “Mary Had a Little Lamb,” but you want more.

You watch the professional pianists out there and notice when they play that they are playing more than one key at a time. You think to yourself, What are they doing, and how I can do that?

They are playing chords. The world of chords is deep and complicated, but beginning to learn is not hard. It does require work and patience; however, the rewards far outweigh the price.

This article will cover what chords are, how to play the three basic chords, learning piano for adults compared to kids, how to use chords, and five ways to voice a chord.

In short, chords are groups of three or more notes played at the same time. There is a lot more involved that just that, but let’s start with the basics.

The most common type of chord is called a triad. Like the name implies there are three pitches involved. Each pitch skips a letter name in between them.

You can do this with any starting pitch, but, for today, let’s focus on the white keys. On white keys, a major chord can be built starting on F and G. Which notes would be in those chords? Stop reading and think about it.

A major chord based on F would include the pitches, F, A, and C. Remember, in music when you are going up the alphabet and you get to G, you need to start over at A again.

A major chord based on G would include the pitches, G, B, and D. Here is another way to look at the process. In this example, the notes in parentheses are the ones excluded. G (A) B (C) D.

Major chords are generally described as happy feeling or finished. Its opposite, minor chords, are often described as sad, heavy, or spooky. This has not always been the case, but these are what most people think of when they listen to minor chords.

The difference between major and minor is a little more complicated than this brief description; however, that description is beyond what we need for this article. If you want a neat way to explain the difference, visit Tom Topham’s short post.

Minor chords on the white keys can be built on A, D, and E. They are structured by letter in the same way as major. Can you figure these out? See below:

You may notice the only starting white key left off at this point. The triad starting on B and using only white keys is something quite unusual. The notes are slightly closer together; that makes it a diminished chord. It is an advanced type of chord, but you should still try to play it. See what it sounds like and decide for yourself if you like it. B diminished contains B, D, and F.

How to Play the Chords

When playing piano you may have discovered that your fingers are often given numbers to help you figure out how to play. These numbers can show up in the actual music notation if and when you learn how to read it. Let’s take a quick refresher on how these numbers work.

Each hand—hopefully—has five fingers. No matter which hand you are using, the fingers receive the same numbers. The thumb is 1, the index finger is 2, the middle finger is 3, the ring finger is 4, and the little finger is 5. Holding both hands in front of you palms down, list the order of the numbers from left to right. They go as follows: left hand 5-4-3-2-1 and right hand 1-2-3-4-5.

Let’s start with the C major chord. From before, we know the notes in this type of chord are C, E, and G. With your left hand find the C and hover your little finger over it—check out the graphic below if you forgot which letters belong with which keys. Next, hover your middle finger over the E key, and the thumb should be over the G key.The numbers for this are, in order, 5-3-1.

Then, the right hand follows the same order of notes but starts with the thumb. C, E, and G are played by 1-3-5 or thumb, middle, and little fingers. For most piano playing—but certainly not all—the right hand should play to the right of the left hand. Crossing hands is not common at the beginner level, so don’t worry about it.

Look at the following graphic to check your work. Once you’ve got it, give it a play! (Don’t forget to play in center-front of the white keys with your hands gently arched as if they were holding a small ball!)

Play this chord at least 10 times. Play it loud. Play it soft. Play it with the left hand and then with the right. Drop your hands to your lap. Time yourself to see how quickly you can get your hands into playing position; then, share your time with friends and challenge them to beat it. Play the chord up high to the right on the piano and then down low to the left. Explore and enjoy!

The other major and minor chords can be played the same way with the same fingers just starting on a different note. There are more advanced techniques that can be included once this has been mastered, but—for now—stick with playing them in this way.

Your next step should be to find all the major chords—C, F, and G—and all of the minor chords—A, D, and E—for the white keys. Look back if you forgot what they notes they use. Make sure to start your left little finger and right thumb on the correct note.

When comparing adult learners to kids, there is little difference in the way they learn. The main differences come down to mechanical ability and motivation.

Piano for kids, by contrast, can be more complicated.

Now that we have some basic chords under our belt, it is time to start using them in meaningful ways. Let’s start by focusing on one chord at a time.

Play a steady beat on the C major chord with both hands. While playing this begin to sing “Hot Cross Buns.” When the song is over, stop. Try it a few times and focus on singing to the same beat as the chords you are playing. Congratulations! You have just played your first song with chords.

To make this song even more interesting, start adding the G major chord. You will need to be able to switch between the two chords somewhat fluidly. Play and hold each chord as you see it align with the text of the song.

Wow! You are on a roll! If you find this difficult, don’t worry. Chords—just like any other skill—take time and practice. To challenge yourself, begin playing the chords to the beat instead holding them when you see them.

Now, it is time to impress your friends and family by learning to play chords with “Jingle Bells.” Take a look at the graphic below and notice how the phrases align with certain chords. You’ll notice that the F major chord is now included in this song. If you don’t feel comfortable playing this yet, switch out the F major for the G major.

Start by holding the chords when they appear and sing the song. Once you feel comfortable with this, start playing each chord to the beat while you sing at a slow speed or tempo as musicians call it. Then, bring the song up to speed and begin adding the F major in if you haven’t already.

When you can do this, you can consider yourself a good beginner chord player. With these kinds of chords mastered, a whole world of songs can open up to you. Google search “piano chords (insert song) easy” and try to figure out some more your own.

In music, voicing refers to the order and placement of the notes of a chord. Check out these five examples on ways to voice your chords.

Two triads, which is the standard way covered in the previous sections.

Root-Third, which is when on the first beat your hands play the starting note—or root—  and then you play the higher two notes on the second beat. For example, C then E/G. Alternate for the rest of the song or until you want to switch.

Broken Chord, which is when you play each note of the chord on a different beat. For example, C, E, G, and E one after the other.

Rootless Chord, which is when you play the top two notes only. For example, E/G. This gives some interesting variety to the chords and implies that you are not finished. You typically don’t want to use this at the end.

Go back to the earlier section with “Hot Cross Buns” and “Jingle Bells.” Try out these different voicings with those chords and experiment on what sounds best to you.

With these skills under your belt, you will have a firm grasp of piano chords for beginners. You have made a great step on your journey to real piano skill. Now go and play! 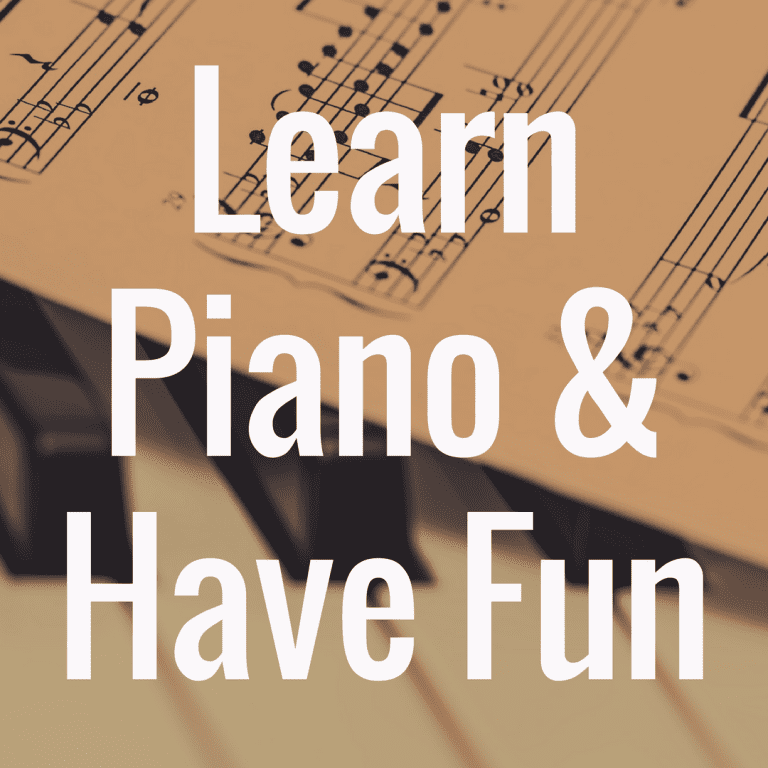 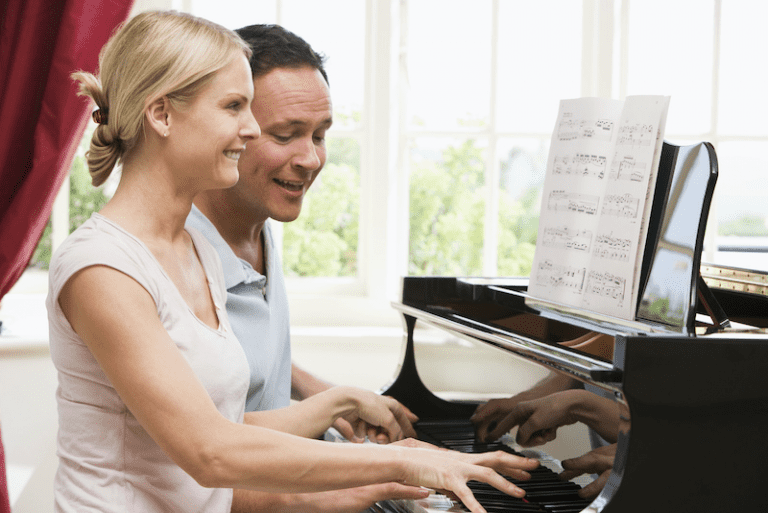 Originating in the 1860’s by the African American community in the south of the United States, blues music generally has… 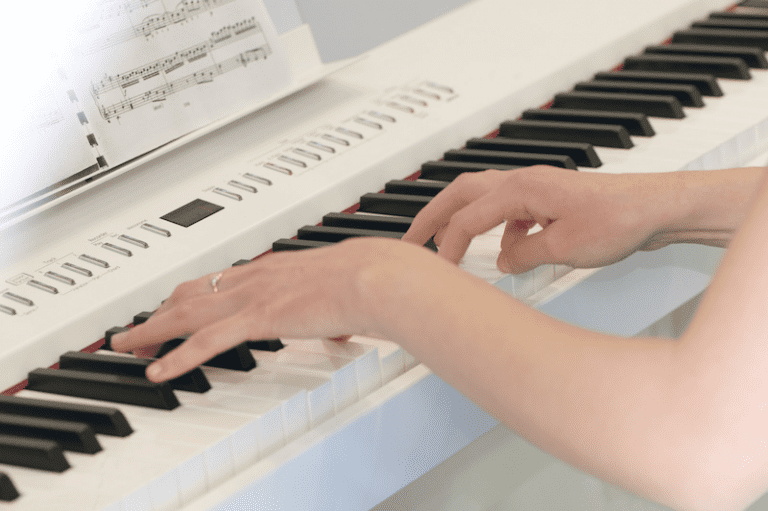 Any student is able to learn to play piano by ear, all it takes is a lot of practice and… 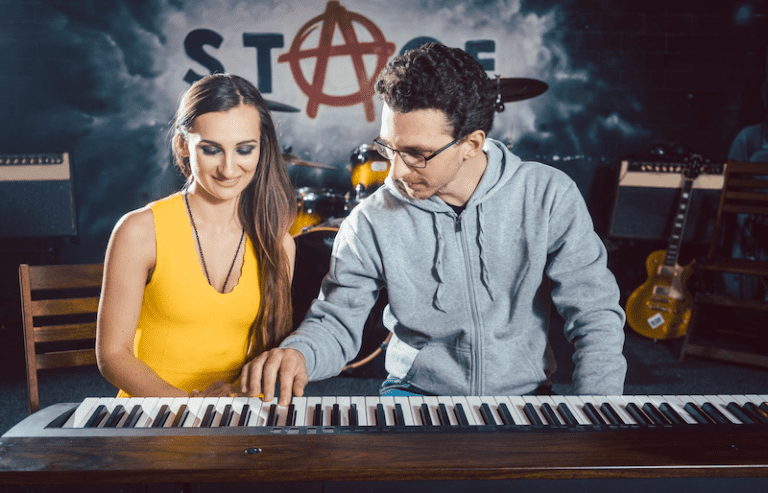 Music is a lifelong connection. There are studies that prove music is usually one of the last things to fade… 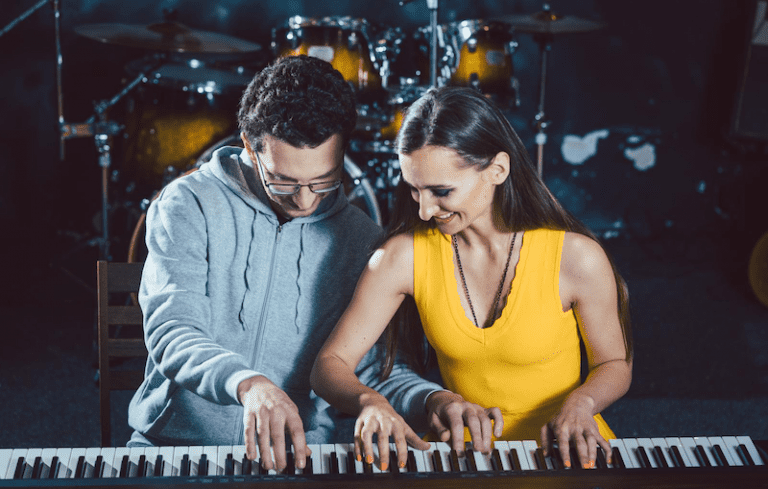 Piano is an instrument that is open to everyone, often being one of the first instruments many learn to play…. 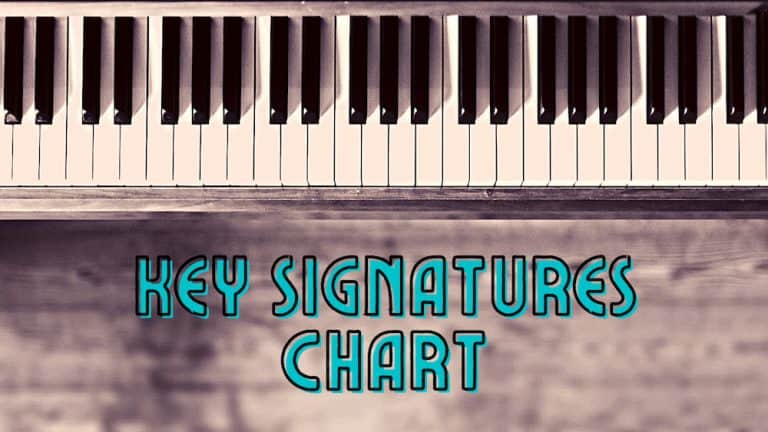 When you look at a piece of sheet music, have you ever noticed those weird clusters of # and ♭… 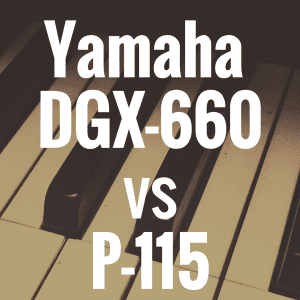 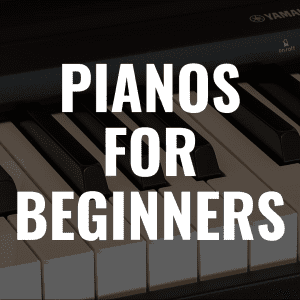