You are here: Home / Roland Pianos / What is the Best Roland Digital Piano with Weighted Keys?

The Japanese electronics company known as Roland was officially started in the 1970s by Ikutaro Kakehashi. The company gained its international success through its synthesizers, electronic drums, amplifiers, and other various electronic music products.

To this day, Roland is still the company that professional musicians go to for their various electronic music needs.  But, when it comes to finding the best digital piano with weighted keys, that becomes a bit of a challenge.  Not because there are no good options, but because there are more than a few good options.

So in this article, we’re going to present you with some of our favorite Roland digital pianos that also have weighted keys.  And, in an effort to better help you make the right choice, you can use our interactive table below to compare various Roland pianos against one another.

The RP 102 has a lot of great classic Roland features at a very reasonable price of $999.

Like most Roland digital pianos, the RP 102 utilizes the SuperNATURAL Piano technology for its main piano engine.  This is the main contributing factor to the RP 102’s impressively realistic piano tones.  Fifteen instrument sounds, ranging from classic grand pianos to electric pianos to organs, come with this digital piano.

Although the RP 102 uses Roland’s most basic hammer action, the PHA-4 Standard Keyboard, players still get to experience a graded keyboard with lighter keys in the higher registers, and heavier keys toward the bottom.

The Roland RP 102 is packed with tons of new technology to keep even the most tech savvy piano students occupied.  This piano is fully compatible with Bluetooth, allowing you to wirelessly play along and interact with various music apps. You can download Roland’s Piano Partner 2 app, which allows users to easily access and adjust the keyboard’s settings and parameters.

Below, please take a look at some of the best-selling digital pianos currently on sale online (and see how well these pianos stack up to the Roland pianos we will discuss throughout today’s article):

Priced a good deal higher than the other keyboards ($2,599), the Roland DP 90 doesn’t disappoint.

The feel of the keys on this digital piano is highly realistic.  Roland uses their PHA-4 Premium keyboard, which includes escapement and a simulated ivory feel on the white keys that helps combat fingers slipping off during play.

The escapement on the keyboard is a mechanical feature found on acoustic grand pianos that allows for rapid, repeated keystrokes. It gives keys a distinct “clicking” feel as you press to the bottom. On the DP 90, it adds to the realism of the action. This keyboard still has the weight and mass that is needed to feel like a real piano, but Roland has managed to make the keys quieter.

All digital pianos and keyboards have some level of mechanical noise when the keys are pressed, but the DP 90 has gotten rid of the worst of it. The quieter PHA-4 Premium keyboard creates a more enjoyable environment, especially when headphones are being used.

The Roland DP 90 has a feature called Individual Note Voicing.  It allows players to adjust the pitch, volume, and tone of not just the piano as a whole, but of individual notes, independent of each other.  Although not many people other than a niche market would get a lot of use out of this feature, it’s a unique way to customize your playing and allows users to create their own tuning or instrument.

A big draw of this keyboard is the amount of tones that come with it.  Most upright style digital pianos tend to have only ten or so basic sounds. The DP 90 has over 300. With fourteen different grand piano tones and five upright piano sounds, you can tell how varied and specific the instrument list is on this keyboard.

Just like many of the other digital pianos in the Roland family, the RP 401R utilizes Roland’s SuperNATURAL sound engine for its large array of piano sounds and many other tones.  In fact, the RP 401R has 305 sounds in addition to its pianos.  That’s a huge arsenal of tones for only around $1,050.

This digital piano comes with 72 different rhythm styles with an intelligent accompaniment features.  Six varied pianist styles allow you to essentially play along with a backing band. The RP 401R actually makes decisions for its accompaniment based on the chords that you play.

There are a lot of things about the RP 401R that make it very kid friendly. It’s possible to set a volume limit on this digital piano.  This is a really useful but often overlooked function of the piano, especially if young kids are learning to play.

Roland offers a couple apps that make playing the piano even more fun. The Air Performer App lets you wirelessly play along with songs, and the Piano Partner App has musical flashcard games to keep young pianists engaged and learning.

Equipped with Roland’s most advanced key action to date, the HP 603 features the PHA-50 keyboard. In a blind test, it would be difficult to differentiate the PHA-50 from the keyboard of a grand piano. The secret to Roland’s success lies inside the keys: real wood.

Although the outside of the keyboard is coated with a molded material that simulates both ebony and ivory finishes, the core of the key is made from real wood. This creates an astonishingly authentic feel and weight when playing. You certainly get what you pay for, and although the HP 603 is priced along the $2399 mark, the quality of this piano is definitely worth the cost.

More advanced pedals have something called half damper detection, which gives slightly more nuance and control to your pedaling. The damper pedal used with the HP 603 uses continuous detection, meaning that it registers the exact location of the pedal at any given moment.  That allows players to get the most detail and expressive precision from the pedals.

It’s amazing how much control Roland gives its players in terms of adjusting and shaping the sounds.  Roland’s famous Piano Designer is a highlight of the HP 603.  Pianists can use the Bluetooth feature to wirelessly connect to the Piano Designer app for a more user friendly interface.

The Piano Designer allows players to tweak these parameters:

The HP 603 also impresses with its “Limitless Polyphony”.  Of course, nothing is actually limitless, but with a working polyphony of 384, it would be a difficult challenge to begin to near the limits of the HP 603’s polyphony.  Roland gives users 319 tones: a far cry from the usual 10-15 found on many standard digital pianos.

The Roland RD 300NX is the most unlike the other digital pianos mentioned.  Priced at $1,299, it is capable of handling any stage, studio, or living room. More suited for the advanced player who needs a lot of bells and whistles, the RD-300NX gives pianists a lot of control from its front panel. It has three sliders, EQ knobs, a pitch bend and modulation lever, and two assignable buttons.

This digital piano has an impressive 939 tones and 200 rhythm patterns.  Its nearly 80 types of multi effects (reverbs, choruses, compressors, and EQ’s) make almost all aspects of the RD 300NX customizable.

A feature that would be most useful in live environments, “Sound Focus” gives the RD 300NX’s sound help cutting through a mix of other sounds.  Phase correction is used to solve this common problem, so it works even when playing at low volumes.

The ability to see what parameters are being changed is also important to many players, and the RD 300NX’s graphic LCD screen allows pianists to do just that.

You can read our review of the Roland RD-300 NX here.

All of Roland’s products are well crafted and contain great features. Depending on your price range and needs, there can be several great options for you.

Someone shopping for a young pianist or child just starting his or her lessons might find the Roland RP 401R the best option.  Its pricing is middle of the road, but it still maintains a lot of kid friendly features to keep younger musicians occupied.

Players may find that they get the most bang for their buck, however, with the RD 300NX. It’s hard to compete with over 900 different sounds. To top that off, all of the tones are adjustable, thanks to the 80 some multi-effects. The physical knobs and faders conveniently located on the keyboard make it one of the most versatile digital pianos of the five.

If a budget isn’t necessarily a concern, serious pianists should consider the Roland HP 603.  The partially wooden PHA-50 keyboard might be worth the higher cost alone.  When you combine the exquisitely real weighted action with its professional tones, its “Limitless” polyphony, and its depth of customization with the Piano Designer, professionals and beginners alike would have a hard time finding any fault with the HP 603. 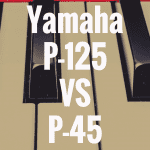 The Yamaha P-125 has recently succeeded the Yamaha P-115, and many people that were interested in … END_OF_DOCUMENT_TOKEN_TO_BE_REPLACED 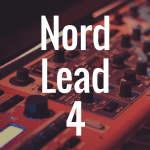 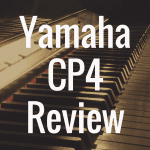 Are you in the market for a piano with effective and intuitive interface?  Or maybe a piano … END_OF_DOCUMENT_TOKEN_TO_BE_REPLACED