If you’re continuing on your journey to learn how to play the piano, you’ll inevitably want to learn how to play a C sharp minor triad.  So in this article, we’re going to help you do just that, thanks to excellent images and diagrams, as well as in-depth written examples and exercises aimed at helping you succeed!

What is a C Sharp Minor Triad?

A C Sharp Minor Triad is made up of three notes from a C Sharp Minor scale – that is, a minor scale with four sharps. Let’s get some vocabulary out of the way before we move any further.

In music, “minor” refers to the tonality of a piece, or the feelings that it invokes as we listen. Something in a minor key will invoke a sad, angry, or melancholy feel, as opposed to something in a “major” key, which will sound happier to our ears.

The difference is made merely by lowering the third note in the scale and what a difference it makes! So, a “triad” – or three notes, consisting of any given note combined with the notes three and five notes higher – in C Sharp Minor will sound much different than one played in C Sharp Major.

Now that we are aware of the differences, let’s take a look at the notes that make up a C Sharp Minor “scale.”

As stated above, a triad is made up of three notes. We will start with the very first note, known as the “root”, the note that gives the triad its name. The root of this scale is C#. In music, the # is called a “sharp” sign and it signifies that the note it follows has been sharped, or raised by one semi-tone. Even though the sharp sign is before the notes in standard notation, a sharped note will be spoke the opposite way, as in “C sharp” rather than “sharp C” as might be implied by how the music is written.

The root is the lowest note, the third is in the middle, and the fifth is the highest. Though a triad can absolutely be played with the third or fifth on the bottom, for the purposes of this article, I will be showing you how to play it in the root position shown in the link above.

Let’s take all of this music theory and apply it to the keyboard.

Now that you know the notes that make up the C Sharp Minor Triad, let’s next learn to find them on the piano. Whether you are using a piano or a digital keyboard, you will notice that your instrument has both white and black keys and that those black keys (excluding the one farthest to the left on a full-sized keyboard) are arranged in groups of threes and twos.

To make it easier, I’ve circled the group of three in red and the groups of two in blue. To find our root, C#, you’ll need to locate a group of two black keys. The C# is the black key on the left.

Great, we have our root. Let’s locate the third and the fifth! The third note in this triad would be an E. You can find E by looking for the white note directly to the left of the second black key in our group of two.

To find the fifth, the G#, look to the right of the set of two black keys you started with to the very next set of three black keys. It should look like this:

The G# is the black key in the middle of the set of three.

The whole thing put together would look like this:

And now you know where the notes of the triad are found! The notes will look the same no matter where on the piano keyboard you are playing. To play lower sounding notes, just look for the black keys on the left side of the piano and to play higher notes, go towards the right.

Alright, we understand the notes themselves, and we know where they are.  Now it’s time for the final step: learning the best hand position to play these notes.

If you’ve ever taken a peek at sheet music, you might have noticed that there are small numbers above some of the notes. These numbers are a suggestion to the pianist as to what would be the most convenient finger to use to play a certain note.

Earlier in this article, we located the notes we need for the C Sharp Minor Triad. If you’ve forgotten, here is a quick reminder.

Let’s begin with the right hand. Using the finger chart above, find your 1st finger (thumb) and place it on the C sharp, like this:

Note that because of the shape of our hands and the location of the root note, your hand will have to scoot up a little higher on the keys than you may be used to if you’ve only ever played chords using white keys. Make sure your thumb is lying on the C# as shown in the photo.

Your 5th finger (pinky) will complete the triad by laying on the G#, just like the picture below.

The 5th finger of your left hand will be the one to play the root this time. Go ahead and set your pinky down on the C#, again sliding your hand a bit farther up the keyboard to make everything easier to reach.

And that’s all there is to it! Now, you can play the triad in both hands! Again, take care use the weight of your hand to push the notes down so that they sound evenly and are played simultaneously.

Now that you can play this triad in both hands, all that’s left is to practice! Once you get the hang of playing all of the notes together, smoothly and at the same time, it’s time to change it up!

Try playing both hands or try a broken triad by playing the notes one at a time instead of together. If you have access to an acoustic piano, or if you have the digital equivalent, now would be a good time to practice with the pedal!

The notes of a triad sound great when played with the pedal down! If you’re using a piano with two or three pedals, the one on the right is the one you’ll want to use. It’s called the damper or sustain pedal.

Pressing down the damper pedal will keep the notes ringing even after you’ve released the key. They’ll continue to ring out until you let it go!

Go ahead and play around with it and you’ll be sure to find a sound that suites you. And when you’re ready, why don’t you give some songs a try? While a song can be played in any key as long as you are using the correct chord pattern, here are some favorites that were composed in the key of C# minor. Give them a listen and see if you can hear when the triad we just learned occurs in the song.

For those pop lovers out there! This song doesn’t follow a typical chord structure, but it does only feature five chords, making this pretty easy to play once you’ve armed yourself with the correct knowledge! C# minor is the chord that starts this off.

“Whenever, Wherever” by Shakira

A favorite of mine back in high school! Extremely catchy and fun to listen to! Just be ready to have it stuck in your head for the next week or so. The guitar riff that open this song begins on a C# minor chord.

“Because” by the Beatles

Admittedly, this is more of a psychedelic song that a pure pop song, but I figured it was close enough to add it here.  This is the final song recorded for their famous Abbey Road album. This song was actually inspired by Beethoven’s Moonlight Sonata. John Lennon says it himself:

“Yoko was playing Beethoven’s ‘Moonlight Sonata’ on the piano … I said, ‘Can you play those chords backwards?’, and wrote ‘Because’ around them.”

Play them back to back and see if you can hear it.  There, see? Yoko wasn’t all that bad.

You can never go wrong with a classic by Ludwig van Beethoven.

It’s Beethoven’s famous Moonlight Sonata, folks. Even if you’ve never heard the name, I guarantee you’ve heard this hauntingly beautiful piano sonata, one of my very personal favorites and a piece that is in most every pianists’ arsenal.

The moving notes that begin the piece are an inverted broken C# minor triad, starting at the G# then moving to the C#, then the E. The left hand plays a low C# and holds throughout. Give it a try, I’ll wait.

Now you’re armed with the know-how to play a C Sharp Minor triad in both hands and a few songs to start learning! Enjoy your practicing! Make sure that you play slowly and with a relaxed hand. Try to play the triad low and then play it high!

Play with your left hand, play with your right, then play them together! Above all else, have fun with your practice! Learning to play the piano can be one of the most satisfying skills that you can learn!

And when you’re sure you’ve mastered the C Sharp Minor Triad, be sure you come back for more. See you in the next article!

Piano Vocabulary You Need to Know

Scale –   graduated sequence of notes dividing what is called an octave

Sharp – raises a note by one semi- tone 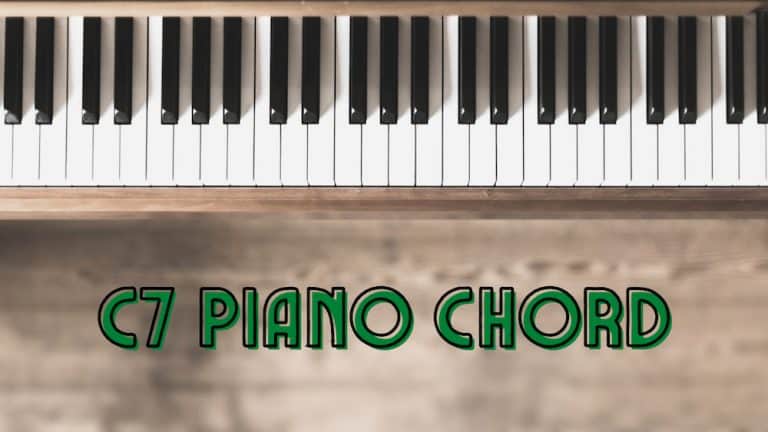 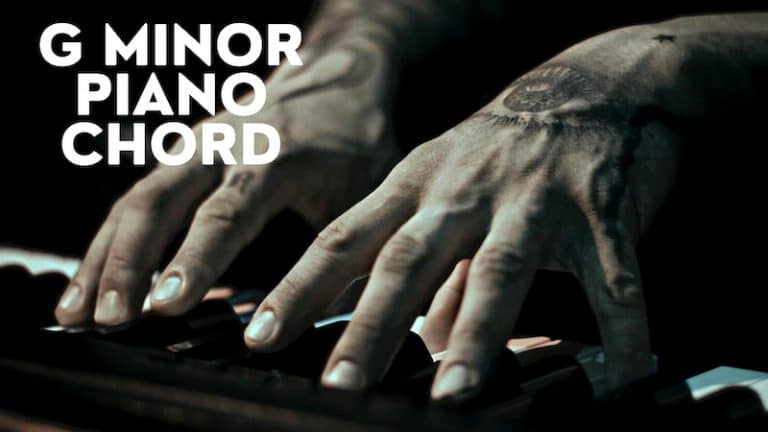 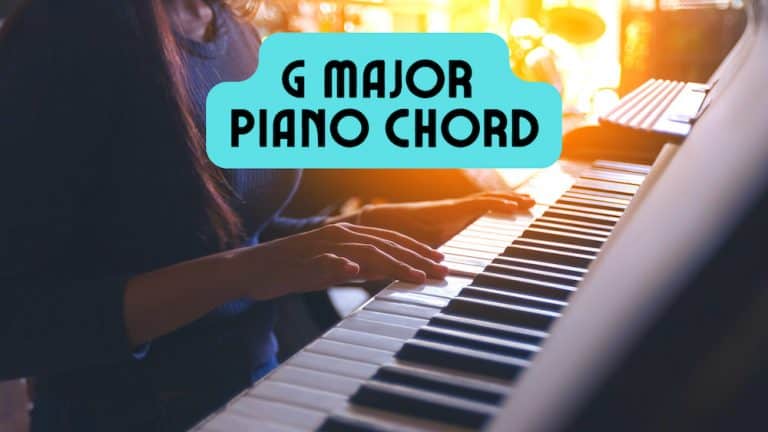 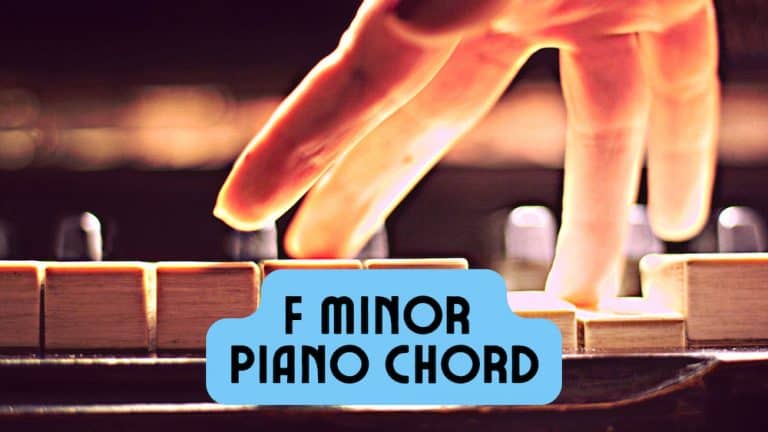 If you’re new to the world of piano, then learning about F minor piano chord can feel like a daunting… 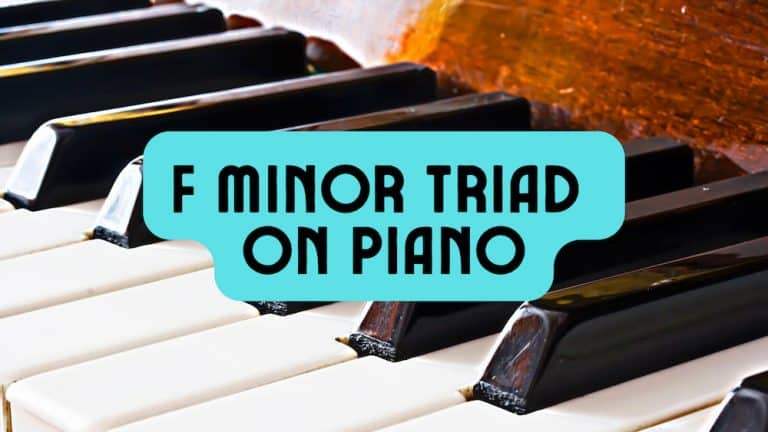 If you’re starting to learn how to play the piano, then you’ll certainly want to understand everything you can about…