Alesis Studio Electronics has been in business since 1984, the year it was founded by the late Keith Barr. Barr, who co-founded MXR, was deeply passionate about engineering professional studio quality instruments and products. He is most profoundly known for the creation of the Alesis ADAT, a digital tape recorder which revolutionized the industry and was later inducted into the Technical Excellence and Creativity Hall of Fame.

However, after enjoying a considerable stretch of engineering success throughout the 90’s, Alesis was forced to file for Chapter 11 bankruptcy in 2001. Almost ten years later the iconic founder Barr tragically died of a heart attack, in 2010. Since 2001, after being sold to Jack O’Donell, Numark Industries owner, Alesis has seen a steady decline. Unfortunately, the Alesis Cadenza is the perfect example and embodiment of that disheartening decline.

Simply put, the Alesis Cadenza is not a quality digital piano. With its lack of durability and constant maintenance issues, along with a horrid sound quality, the Cadenza has set the bar as low as it can go. This may actually come as a surprise to some, as Alesis has been behind so many quality and groundbreaking products, such as the QS8 and the Fusion. Sadly, as a budget full-size digital piano, the Cadenza does not live up to its fellow counterparts.

Below, please enjoy the interactive guide that was created to make your piano purchase easier.  Compare the Alesis Cadenza to the best digital pianos on the market in its clas:

The Cadenza has a rather nasty concept design, with the back portion of the piano looking like it was built right on top of a square metal construction pipe. The piano comes in an all-black color, and also includes a matching piano frame that seems sturdy and reliable. The frame and piano encasing has a sort of wooden feel to it, and I would imagine this is what factors into some of the price for the machine, because it surely can be the dynamic features of the piano.

The interface of the piano is pretty simple, and easy to navigate. It does have about a two inch, backlight blue LCD screen which provides the user with some control over the piano’s range of tones and functions. There are knobs and sliders for the volume, the eight individual voices, metronome, touch sensitivity, and other features. The interface doesn’t seem cluttered at all, and works decently with the construction of the piano as a whole.

The action of the keys presents a number of problems, however, when it comes to the Alesis Cadenza. The company describes the machine as an 88-key, hammer action piano, but I have a hard time agreeing with that description. The so-called hammer action on this piano is absolutely dreadful. You can easily tell the engineering is nowhere near the caliber of a Yamaha, or a Casio, but you would expect any decent company to put forth a considerable effort into such an important component of a digital piano. If not, I would rather the Cadenza have the keybed of a simple keyboard, with no supposed hammer action at all.

Below are a few pianos that have currently cracked the best sellers list online.  Be sure to compare their specs and prices to the Alesis Cadenza:

Now, it seems like all sorts of clicking noises and other sounds arise when you play this machine. At first you may try to ignore it, but after a while it becomes absolutely unbearable. This doesn’t even mention the numerous accounts of keys that fail, and Alesis’ relative non-efforts to do anything about it. Almost every person I’ve known who’s had experience with this machine has had to call Alesis support to request maintenance, a replacement, or better yet a refund. It’s almost needless to say that Alesis has ceased production of this piano, and even those who currently own the machine would have a hard time even finding the user’s manual on the internet.

There are a number of people who see nothing wrong with the sound of this piano, but I notice a considerable drop-off in quality when comparing it even to pianos in its price range like the Casio CDP-120 or the Korg SP-170. The Cadenza grand piano tone flat-out sounds terrible. There’s no way to get around it. The only way to look past it is if the machine is simply bought for a true novice and beginner, who wouldn’t know the difference between a real piano and a toy. And if that is the case, there are plenty of beginner digital pianos that can be bought for a lesser price than that of the Cadenza.

The grand piano tone also comes with 7 other voices, and includes the ability to split and layer the sounds. However, there is no duet function which allows the keyboard to split into two sections suitable for a student and teacher. The piano also comes with a singular headphone jack.

I was also surprised that the Cadenza didn’t fight to bring a larger sense of portability to this budget machine. The piano gives off the feel of a piece of heavy construction, as if you’re carrying around an I-beam. The piano is almost five feet long, which is far and above even some of the digital console pianos I’ve come in contact with. Worst of all, it weighs over fifty pounds. You might have to do some cross-fit training to carry this thing around.

The connectivity of the Cadenza is surprisingly one of its stronger points. The Cadenza has both USB and MIDI connections available. It has both MIDI input and output jacks, which will allow you to connect with external devices like other MIDI keyboards or MIDI programs on a computer. The USB port is an up-to-date, class compliant connection which will allow you to plug right into any Mac or Windows platform with ease. It also has a quarter inch stereo input for playing along with external stereo music devices.

Another good feature is the two-track recording system, which will allow you to record your own compositions on different channels and play them back as you like. Although I’m not sure I could bear to listen to many of the preset tones on the Cadenza.

I’m sure there are more seasoned pianists out there who can find more value in the Alesis Cadenza, but my simple advice is to approach this product at your own risk. The fact that not even more than two years after its initial release it is already no longer in production should be a tell-tale sign. Nevertheless, those who choose to venture into these deep waters should not have to pay more than $500 for their bravery. 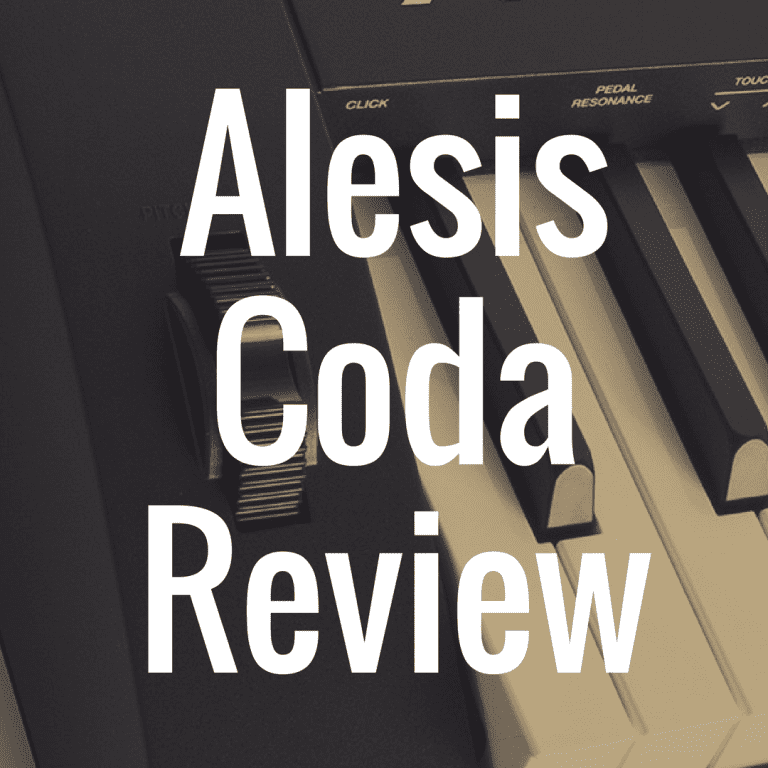 After several absent years from the keyboard scene and the resounding failure of the 2011’s Cadenza product, Alesis tries again… 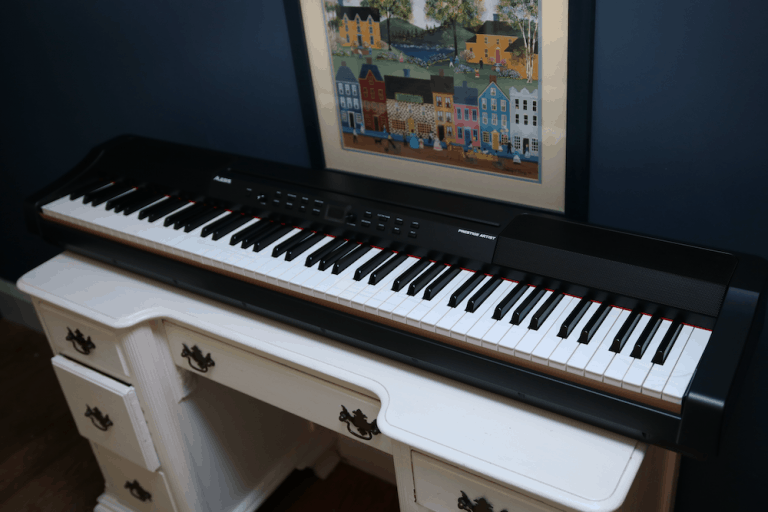 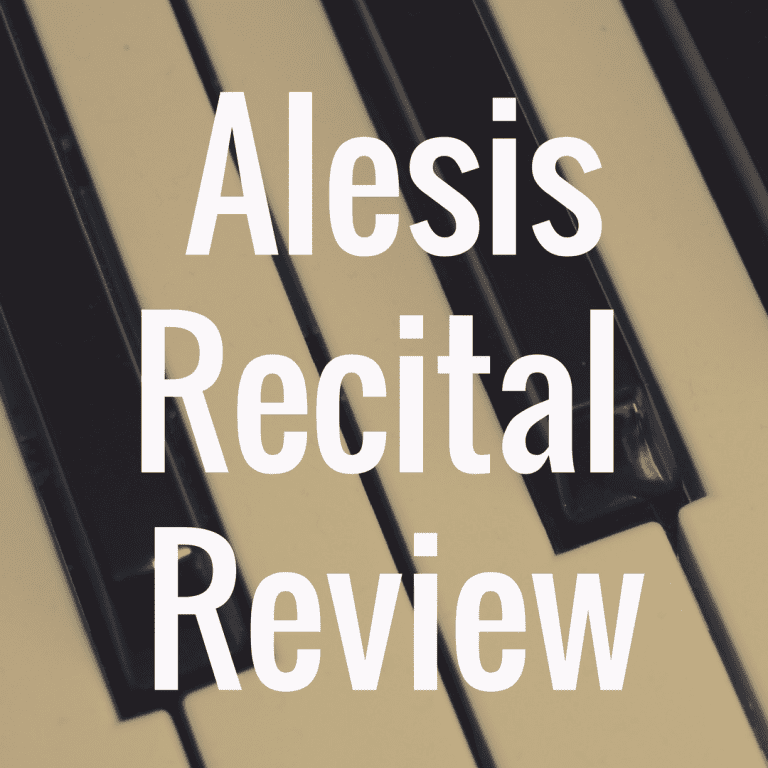 Since the mid 1980’s, Alesis has been a huge manufacturer of innovative electronics, including their stylish line of electronic pianos….