When purchasing a digital piano for a beginners, the buyer should always look for the best piano they can afford without busting the budget.  Many manufacturers have developed digital pianos that are affordable for the first-time buyer or for the buyer who isn’t sure that their beginning student will actually enjoy learning to play the piano.

The Yamaha Corporation addresses these issues with their Arius digital piano line of decent and affordable pianos.  Using their 30+ years of experience in crafting fine digital and electronic keyboard instruments, Yamaha has developed the Arius line: good quality digital pianos that may well be the best beginner digital pianos that meet the needs of first-time buyers who wish to preserve the budget while providing a solid instrument for their beginner.

Below, please use the interactive guide that allows you to directly compare Yamaha Arius digital pianos against other noteworthy instruments on the market:

Here are the models I will discuss in this article:

The YDP 103, like other Arius pianos, features an integrated cabinet and 3-pedal system.  This 3-pedal mechanism allows half damper pedaling, as well.

This piano also features the Graded Hammer Standard keyboard action, a piano action developed by Yamaha to mimic the feel of a grand piano.  The GHS action gives the piano a lighter touch at the treble end of the piano with an increasingly heavier touch as the musician descends into the bass section of the keyboard.

The YDP 103 digital piano and the YDP 144 digital piano (discussed below) have what those in the industry call ‘semi-weighted’ keys.  Semi-weighted key systems combine the spring-loaded action of a lesser piano with light weights attached to each key.  This provides less resistance than a fully weighted keyboard.  See the discussion of the YDP 144 regarding the touch of these two pianos.

And below, please take a look at some of the best selling digital pianos currently on sale at Amazon (and see how they compare to the pianos we discuss in this article):

I’m categorizing these two models together because I believe there are significant differences between the 144 and the 164.  I found an interesting video (below) comparing these two pianos side-by-side, literally.

Here is a summary of the differences as articulated in the video:

Yamaha has developed a cool app for their digital piano lines: Smart Pianist.  Smart Pianist is a dedicated app that allows you to access your music-related functions when your smart device is connected to your digital piano.  Some of its features may be limited on the Arius line of pianos, however, so be sure to clarify this point with your Arius dealer.

The materials used on piano keys can become a significant aspect of your purchase.  The keys of the 164 consist of synthetic ivory and wood, both of which are more comfortable under the fingers than the plastic keys that some instruments use.

The young man in the video did not mention that both the 144 and the 164 have integrated 3-pedal mechanisms capable of half-pedaling.  For a beginner, this feature is probably not as important.  But it is good to know that the instrument is capable of such a technique.

I recommend that you watch the video (linked above).  I’ve covered most of the points you will see and hear in the video.  However, watching the video will give you the opportunity to hear the differences between the two pianos as they are played side-by-side.  To my ear, the sound differences can make all the difference.

You will notice in the video that the young man, tended to stay away from the lower bass notes on the YDP 144.  When I played the 144, I noticed that the lower bass tones tended to sound mushy, as if the sounds all ran together.  The 164, however, has a much clearer bass register that allows the musician to truly enjoy the incredible sampling of Yamaha’s flagship concert grand, the CFX.

The reviewer also mentions the difference in the integrated speakers—the 144 has two 8-watt speakers, whereas the 164 has two 20-watt speakers.  This is a pretty noticeable sound difference, as the 164 will sound fuller in sound.  So if you plan to play in a large venue where people would need to hear your music from a far away distance, the YDP-164 is more preferred than the YDP-144.

I didn’t care for the touch of the 144.  The key action was too light for my taste; I prefer a piano action that resembles the touch of an acoustic grand.  As a piano teacher for 30+ years, I feel that the lighter touch of the 144 might be a disadvantage for a beginning student because it is not an authentic acoustic feel.  Learning to play piano on the YDP 144 might hinder correct piano technique and cause some distress to a beginning student should they move on to an acoustic piano or a digital with an authentic acoustic touch.

This instrument is equipped with the CFX nine-foot acoustic grand piano sampling present on many of the Arius instruments and all of the Clavinova series of Yamaha digital pianos.  The CFX grand is the flagship of the Yamaha grand piano and is the piano of choice in hundreds of concert halls all over the world.

The YDP 184 offers 24 different voices and 256-voice polyphony, the most of any Arius piano.  Polyphony becomes an important consideration to intermediate and advanced pianists who wish to record their music and refers to the number of notes that can be recorded or played at the same time.  The YDP 184 allows for such recording with its built-in USB drive, another prime feature that none of the other Arius pianos offer.

Retailing at about $2,800, the 184 is still quite the value for a piano with its capabilities.

The Slim series of Arius pianos classify as “compact” digital pianos.  Their cabinetry measures five inches less deep than the Standard line of Arius pianos.  This line of pianos is perfect when space is at a premium: apartment homes, small classrooms, and even college dormitory rooms.

Here are the three Slim series in the Arius line.

The YDP S34 offers the Graded Hammer system of keyboard action, Yamaha CFX nine-foot grand sampling, and String Resonance in a cabinet that is five inches less deep than the Standard line (seven inches less deep than the YDP 184).  The S34 and the other Slim line of Arius digital pianos also utilize an interesting music stand style in which the keyboard cover lifts up and back to reveal a built-in music stand.

This piano is also capable of interaction with the Smart Pianist app, although I don’t know how extensive the interaction may be.  The YDP S34 retails for about $1,400.

The S52 piano does not provide CFX sampling or interaction with the Smart Pianist app, from what I can discern.

It retails for about $2,200, so it’s rather confusing that the S34 offers more features and a better piano sound than the S52 for $800 less.

Interestingly enough, the S54 model does offer the CFX sampling, interaction with the Smart Pianist app, and the Graded Hammer III piano action for the same retail price of the S52.

Perhaps the S54 is an upgraded version of the S52, but I can’t find any allusion that the S52 is discontinued.

I traveled over 75 miles, visiting every authorized Yamaha dealer (and some UN-authorized music stores) to try to play the Arius piano models for myself.  Only one store had one in my major metropolitan area.

When I asked a salesman why this authorized Yamaha dealer only carried one of the Arius models in his large store, he responded very honestly.  He told me that most Yamaha authorized dealers are not very impressed with the Arius line of Yamaha pianos.  When I asked why, he suggested I play the YDP 144 and then play the CLP 625 sitting next to it.

I immediately noticed the lighter action of the 144 and the mushy bass of the instrument.  When I played the CLP 625, it sounded so much richer and fuller than the 144.  The bass of the CLP 625 resonated cleanly and beautifully.

The salesman went on to explain that the Clavinova series is so much better than the Arius that most stores will actually reduce the price of the CLP 625 to that of the YDP 144 Arius piano so that their customers could spend the same amount of money and get a higher-quality instrument than the Arius piano.  As I visited the other stores or spoke to salesmen on the phone, I learned that his opinion of the Arius line of pianos was shared by every salesman I contacted.

Honestly, I agree with them all.  Arius sounds decent—true enough.  But if I had to choose between spending $1,500 on the YDP 144 or the Clavinova CLP 625 model, I would choose the Clavinova 10 out of 10 times.  It’s a more durable piano with better sound, touch and features than the Arius models.

With that said, the YDP-144 can sometimes be found for $1,100, while the CLP-625 can sometimes cost close to $2,000.  So, if the price discrepancy is that wide, you may want to either go with the YDP-144 or choose to wait a few months, save up a little bit more money, and ultimately get the CLP-625 so you can make the jump to Clavinova. 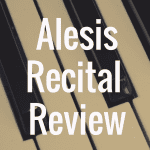 Since the mid 1980’s, Alesis has been a huge manufacturer of innovative electronics, including their … END_OF_DOCUMENT_TOKEN_TO_BE_REPLACED 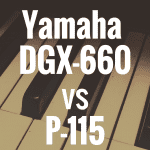 In this article, we’ll look at the differences between the Yamaha DGX-660 and the Yamaha P-115 and … END_OF_DOCUMENT_TOKEN_TO_BE_REPLACED 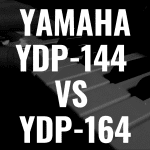